I just had a SCAM call from the following numbers in Sydney 0280051898 / 0280914070 pretending to be Telstra/Optus Tech Support, warning me that my PC has been hacked into while they were trying to get me to give them access (to Hack it).

DO NOT FALL INTO THIS TRAP.
DO NOT CO-OPERATE WITH THEM
THIS IS A SCAM

Although this may not be directly related to LinkedIn or Social Media, but we definitely need all the support we can get to warn everyone in our networks using Social Media.

This was a very obvious scam that I wanted to share with everyone in Australia and all over the world, if you get a call from such numbers or with such instructions be aware.
They will tell you that your computer has been hacked into and ask you to download a remote access software such as "TeamViewer" so that they may access your pc (Hack into it), they will claim that they are from  Optus or Telstra Tech support and threat you that they will disconnect your internet service if you dont get the hacking removed as it could impact the entire internet network in Australia (yea right).

It is very obvious that they are far from professional from the way they talk, optus/telstra wouldn't hire such people.
They are calling random numbers and have no idea who they are speaking to (as in wouldn't say can I speak to Mr. X), they don't know your internet UserID, if in doubt hang up and call your ISP Support directly. I went along with them to see how far they want to go, they asked me to downloading the teamviewer (remote access software) they asked me for the ID and password showing on the software claiming they wanted to verify them, I asked them to give me the numbers and i would verify them (playing along) they said "sorry we sent the number on your screen and we want to verify them before we proceed (as if).

Finally,
Be AWARE and SHARE if you CARE (LIKE/COMMENT/FORWARD/SHARE/EMAIL/....)

Is it true that Linkdin initially gives up to 3000 invitation requests and that they put some restrictions on the invitations sent after that ??

Today I received a question from a friend of mine asking me if it true that Linkdin initially gives up to 3000 invitation requests and that they put some restrictions on the invitations sent after that ?? Below is my answer .... Yes its true, which is why invites should be used wisely (before you run out of bullets) :) However, when you do run out, all you need to do is to send LinkedIn Customer Support linkedin_support@cs.linkedin.com a request to increase your invitations which they would often do by giving you something like 50 (with the restriction of not requesting any more for another 30 days then you can just request again and they will give you another 50 and so on). On the other hand, by following some of the tips that I have posted on my blog www.LinkedFans.net you can capitalize on improving the number of invites you can get by doing things like: • joining the large LION groups • announcing that you are a LION (LinkedIn Open Networker) by including the word LION in your profile headline • announce your interest in connecting with others and invite others to connect with you through LI groups • You can also add yourself to that list when you subscribe for a premium membership through OpenNetworker for $9.95/month or $49.95/year Best Regards, Ehab Elagaty www.LinkedIn.com/in/SAPNetWork
Posted by Unknown at 12:10 pm No comments:

This is an interesting question that I have posted on LinkedIn back in APR-2011 where I have received 52 Answers for.

I am preparing a presentation for a networking event in Jeddah about Networking & LinkedIn.

Here are some reasons why I think people may use LinkedIn for, would appreciate it if you have others to add to the list:
- To stay in touch with friends and colleagues.
- To reconnect with old friends and colleagues that you may have not been able to find or be found by otherwise when emails and phone numbers are changed.
- To get introduced to new interesting friends and business connections.
- To promote your products and services, find or be found by new customers.
- To find or be found by new vendors, suppliers or service providers.
- To find a job through your network and to make it easy for employers and recruiters to find you.
- To find someone to fill a vacancy that you may have.
- To find experts and get advices.
- To share your experience, help others and give advices.
- To stay updated with the latest news especially about your network and whats new.
- To join groups and start or join in interesting discussions.
- To build and strengthen your personal branding and online presence for you or your company (improving the chances of being found on Google).
- To find new opportunities for business, partners or investors
- To consolidate in one place trusted (to some degree) recommendations that you can get from your colleagues, friends and business contacts.
- To use who you know in common to ask for reference about someone or a company before working or doing business with them.
- To look up anyone that you need to meet or speak to and find out what you can about them to understand them better and to make a good impression.
- To be able to post questions and get different answers
- To be able to create or participate in polls (surveys) and find out the results.
- To be able to post and share announcements, updates, news, cool things.
- To be recognized as a subject matter expert in your area of expertise.
....??

I noticed a great interest in this question and participating in answering it, so I am re-opening it, I would like to thank each and everyone contributing even if it is just with a little comment. Will try to keep you updated with the final list if I get to finish it or if it stops : )

Email ThisBlogThis!Share to TwitterShare to FacebookShare to Pinterest
Labels: LinkedIn, Looking for Work

Below are some very useful & tiny (EZy 2 remember) links that will take you to some advanced searches of LinkedIn Members in different areas and regions.
You can simply modify the selection criteria from the left side by adding keywords, selecting companies or industries, modifying countries selected,...etc.

NOTE:
★★ I know for a fact that the following members also have 30K direct connections, if I or any of them show up #2,3 or 4 it only means that we may have a difference of 1 or more connections at the time the search is done, or some of us may have exactly the same number of connections but we can not all be displayed as #1 at the same time:
As a matter of fact  Stan and  Hesham  have made it to the top before me (by reaching the limit of 30,000 connections) and I have caught up with them in 2012-APR, so I guess we are all #1 J

@ Stan,
Thanks for being one of my best LinkedIn mentors, if it wasnt for leaders like you, I wouldn't have been able to catch up with you.

@  Hesham,
I have been looking forward to catching up with you for a long time, thanks for setting up an example for me to be #1 in the Middle East. 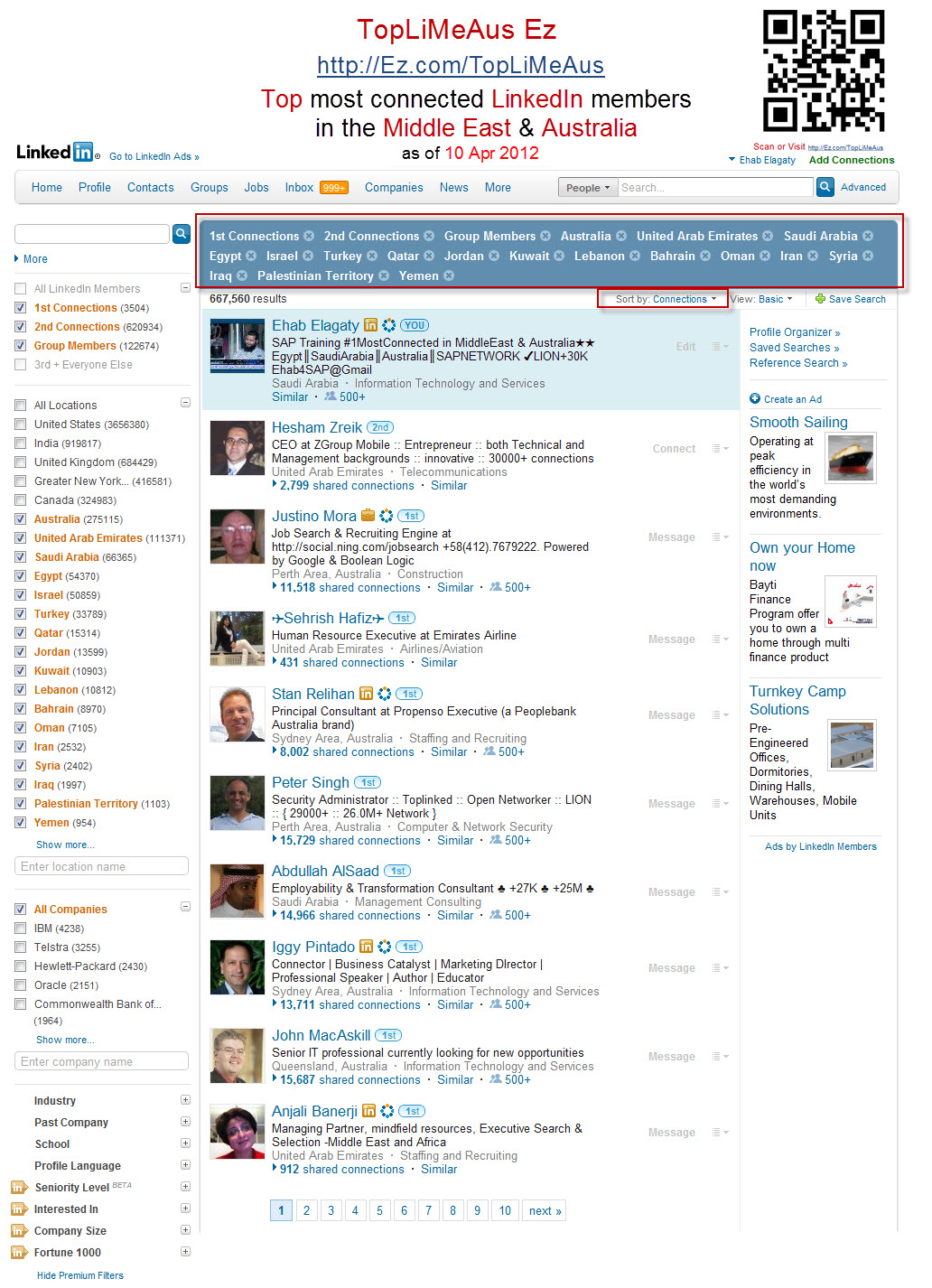 The SIZE of your LinkedIn Network Matters

Check out this SlideShare Presentation:
The SIZE of your LinkedIn Network Matters
View more presentations from Ehab Elagaty.
Posted by Unknown at 11:19 am 1 comment:

Check out this SlideShare Presentation:
Using LinkedIn presented by Ehab Elagaty at the Jeddah Network Event 2010-08-09
View more presentations from Ehab Elagaty.
Posted by Unknown at 11:17 pm No comments:

Dig the well before you get thirstly.
You are Not Working if you are Not NetWorking : )
Posted by Unknown at 11:45 am 1 comment:

LinkedIn & How to rapidly expand your network


Sorting by Connections through Advanced Search is a very useful feature that can be utilized in LinkedIn to get a list of the top 10-100 most connected people in a particular country, region, group of countries, industry, groups, professions, …etc.

Here are some examples of the top most connected members in Saudi Arabia / Egypt / the Middle East / Australia / the SAP industry in the Middle East & worldwide, where I am listed as:

last updated 2010-06
Such searches can make it easier to target getting in touch with or connecting with the Top Most Connected people in a particular country or industry. You can filter further your lists by selecting further selection criteria.
Below for example are some of my lists I personally use to connect with what I would call the (Safe To Invite) lists which are similar to the searches above but with the filter of restricting the search for members who belong to at least one of the largest LION groups “TopLinked.com (Open Networkers), OpenNetworker.com, LION500.com (Open Networkers)” Such members often accept all invitations or at least welcome invitations (as in may archive an invitation request but should never mark a connection as “I Don’t Know” which can work against you and restrict you to not being able to invite members unless if you enter their email addresses):
Most Connected TopLinked / LIONs (LinkedIn Open Networkers):
Important Tips to rapidly expand your network:
Feel free to Bookmark / Share / Forward this page should you find it useful, or contribute with your comments.
Keep an eye on www.LinkedFans.blogspot.com for more valuable tips to come.
Ehab Elagaty
www.elagaty.com
www.elagaty.com/addehab
www.linkedin.com/sapnetwork
Twitter: ehabelagaty / sapnetwork / sapnetworkme / linkedinfans
Posted by Unknown at 5:21 am 2 comments:

One of the most important tips that I was given to expand my network rapidly when I first started using LinkedIn back in Mid 2005 was to Search for then connect with the most connected people (especially the LIONs / Open Networkers / TopLinked members) in my country, area of specialty or interest.
So I wanted to share this important tip with you along with some links as examples for searching for most connected people / TopLinked/Open Networkers / SAP specialists in the Middle East / Saudi Arabia / Egypt / Australia / Worldwide.

By following such tips I have managed to hold the following positions (2010 - April):
Click on the links below to see the search results

#1 SAP Specialist Most Connected in the Middle East

#1 Most Connected in Egypt
(had I changed my location back to Egypt, excluding Mr. A.AlSaad)

#1 TopLinked/Open Networker in Egypt
(had I changed my location back to Egypt, excluding Mr. A.AlSaad)

#3 TopLinked/Open Networker in Australia
(had I changed my location back to Australia, excluding Mr. A.AlSaad)

#4 Most Connected in Australia
(had I changed my location back to Australia, excluding out Mr. A.AlSaad)

#5 TopLinked/Open Network in the Middle East

Some of my favorite LinkedIn Groups: (more can be found on my profile: www.linkedin.com/in/sapnetwork)

Display the logo on your LinkedIn

You can simply join the group and display the Linked Fans logo on your LinkedIn profile from this link: http://www.linkedin.com/e/gis/59309/5C977D5171B1
OR
www.linkedfans.net/group